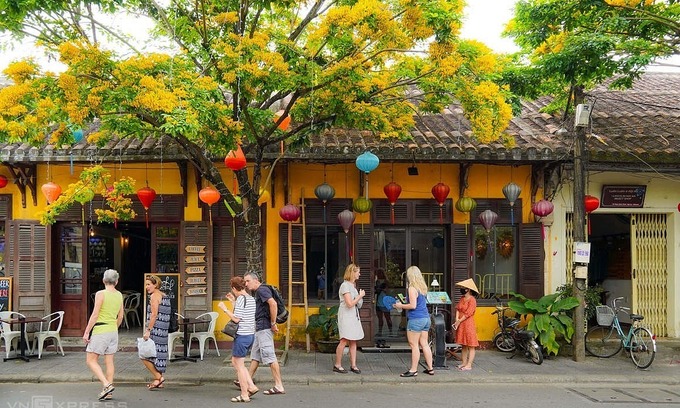 Ancient town Hoi An reopened its pedestrian zone, night markets and craft villages Wednesday after over a month of closure due to persistent flooding.


Many street art performances will be organized in the evenings, said Truong Ngoc Cam, director of Hoi An’s Culture and Sports Center.

Tickets to the ancient town in Quang Nam Province will be reduced by half to VND10,000 ($0.43) per person from November 18 to the end of June next year.

The moves aim to warm up the local tourism industry, hit hard by the Covid-19 pandemic and storm-driven floods.

All tourist activities in Hoi An had been suspended since early October following heavy rains and constant flooding. Many streets around the town were turned into rivers, forcing residents to commute by boat.

“This was the first time in 45 years Hoi An got hit by six floods in a month since October 10,” said Nguyen The Hung, vice chairman of the town.

Central Vietnam, including Quang Nam, has been hit by torrential rains, widespread flooding and landslides caused by one storm after another since early October. At least 235 people have been killed or are missing with the government saying the property damage has been the worst in decades.

Tourism in Hoi An had only resumed in early September following a pause due to the second Covid-19 outbreak wave that hit the country in late July.

Hoi An was recognized as a UNESCO world cultural heritage site in 1998 and has become one of the top holiday destinations in Vietnam, attracting nearly five million visitors last year, including 3.7 million foreigners. The town is home to well-known traditional craft villages such as Thanh Ha pottery village and Tra Que vegetable village as well as the 400-year-old Pagoda Bridge, a symbol of Hoi An.

Vietnam has gone 77 days without a community transmission of the novel coronavirus.