Banh trung kien, or ant’s egg rice cake, is a dish made by the Tay ethnic people living in Cao Bang and other mountainous provinces in northern Vietnam.

Ants’ eggs are as large as rice grains and milky white in color. The eggs for this dish are collected from non-toxic ants’ nests on trees.

They are mostly seasoned with green onion, liquid fat and salt though in some places people also add minced pork, dried onion, sesame, grounded peanuts, and other spices.

The filling is covered in dough made from glutinous rice flour, wrapped with va, or fig, leaves, and steamed for about 45 minutes.

The best time to eat this cake is in April and May, the black ants’ breeding season. 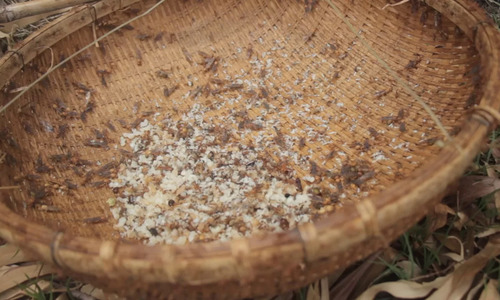 Then the duck is roasted with crispy golden-brown skin outside and tender meat inside. 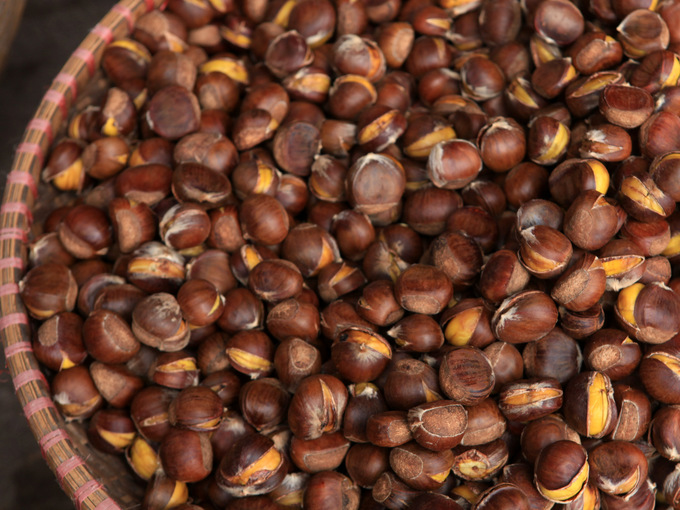 As the name suggests, Trung Khanh chestnuts come from Trung Khanh District in the northeastern part of the province. Since the district has cool weather and ideal soil, chestnuts here have a subtle richness unlike the mild taste one would normally associate with them.

Roasted, steamed or dried chestnuts are the ideal snack for the rainy season.

People also add chestnuts to cook, adding it to pork to make a stew or grinding it to a powder for use as cake filling.

The best time to try Trung Khanh chestnuts is in September and October, the harvest season. 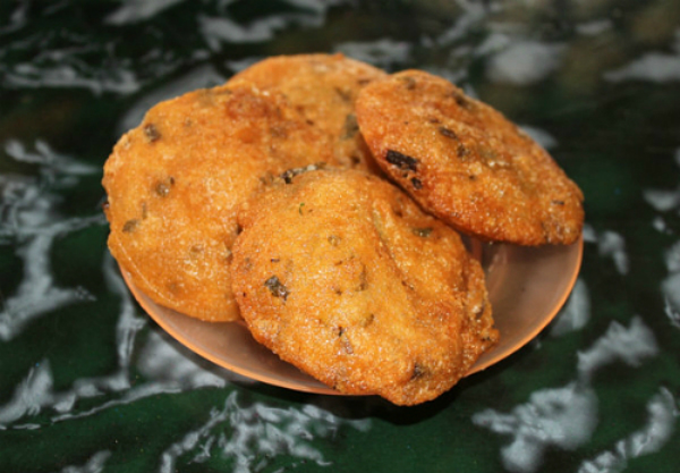 The crust is a dough mixture of rice flour, glutinous rice flour and soybean. Locals use newly harvested rice, soak it in water for half a day to soften it and grind it into flour. Soybeans and egg yolks are added to the flour to make a batter.

The filling is made from duck meat that has been deboned and marinated just like roasted duck.

Then it is deep fried in a large wok in hot oil and flipped over until it is golden brown on both sides.

People eat this cake during cold weather. Locals say between November and February is the banh ap chao season when the smell of the cake pervades every street.

Xoi tram, or sticky rice mixed with the fruit of the harde whole tree, which can be found in Cao Bang and neighboring provinces.

This tree only yields its iconic blackish fruit in fall. Locals soak the fruits in warm water to soften them, remove the skin and seed and mix the flesh with cooked sticky rice to give it a pink and purple color. The fragrant sticky rice has a rich taste to it.

Banh cuon, or steamed rice roll, in Cao Bang comes with a bowl of broth made from bone that has Vietnamese pork bologna or cha lua and egg instead of the small bowl of fish sauce that one would often see in other parts of the country.

As a result, the dish is also called soup steamed rice rolls to distinguish it from its cousins in other areas.

Though it has its roots in China, visitors to Cao Bang can see this dessert play an important role in locals’ Tet (Lunar New Year Festival) celebrations, being placed on ancestors’ altars as part of the offerings and served to visitors.

Khao cake is made from glutinous rice and the filling is made of sugar, sesame, peanuts, and lard.

Locals say the cake does not go bad easily and can be stored for long.