The street, around 400 meters from the iconic Pagoda Bridge, is a popular tourist attraction and home to scores of shops, souvenir vendors and eateries, including famed Banh Mi Phuong and Ba Buoi Chicken Rice.

The initiative is part of a major project by Hoi An to extend current walking zones with a vision to making the central town motor-free. Motorbikes will be restricted on popular tourist streets, while a public bike scheme is developed to provide alternative transportation.

The initiative comes with Hoi An experiencing a recent drop in its bicycle population in favor of motorbikes. It is estimated bicycles account for only 4 percent of all vehicles in Hoi An by 2017, a steep fall from 44 percent in 2012, according to Car Free Day Japan, a Tokyo-based non-government organization.

Nguyen Van Son, vice chairman of Hoi An, said Hoi An has set its sights on becoming “a town of bikes” or “a no-motor town.”

Hoi An has pioneered pedestrian-friendly streets since 2004, with most hotels, restaurants and homestay facilities offering bike rental services.

Many visitors prefer the tranquility of biking through narrow alleys and past yellow houses decorated with old red-tiled roofs. Rental prices range from only VND20,000 to VND40,000 ($0.87 – 1.73) a day.

Accommodation reservations provider Agoda last June listed Hoi An as one of the world’s six best spots to explore on bicycle. 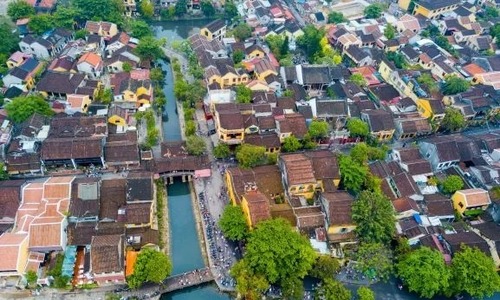 Hoi An, 20 years as a world cultural heritage