On Monday afternoon, Le Tien decided to go swimming at Bai Sau beach with his friend. After about 10 minutes, he experienced a stinging sensation to his forehead and stomach. Soon it began itching. Looking around for the culprit, Tien saw two sea worms swimming and immediately got out of the water. Although he developed no rash, it continued being itchy, Tien said.

“They have appeared a lot in recent days,” he said. As a local, Tien knows these creatures quite well.

“The sea worms bear many tiny bristles that are slightly toxic and cause itchiness when people come into contact with them. But it can be fixed with some cream sold in local drugstores,” he said.

On the five-kilometer long beach, many thumb-sized sea worms have washed ashore, concerning many tourists.

“I come here every year for our vacation but this is the first time I’ve seen these sea worms here,” said Nguyen Thi Thuy Trang from Tien Giang Province.

While eight of her family members went for a swim, she stayed ashore and watched over three grandkids, telling them not to swim in the sea because their skin was sensitive and could be easily affected by the worms.

However, not everyone was worried or scared. Le Thanh Trung from HCMC and his brother used a plastic shovel to put dozens of sea worms into a bucket and played with them.

“I’m not afraid of them, just need to avoid them when you swim and you will be fine,” Trung said.

Pham Khac To, director of the Vung Tau Tourism Management Board, said these sea worms usually appear on the beaches every May.

“If you have contact with them, you should not scratch because it may cause infection. Just rub lime or soap on the area to ease the itch,” To said.

The Vung Tau Tourism Center is yet to record any cases that need help due to the sea worms. Its medical team says the worm’s toxins can cause allergic reactions, but do not cause serious harm. 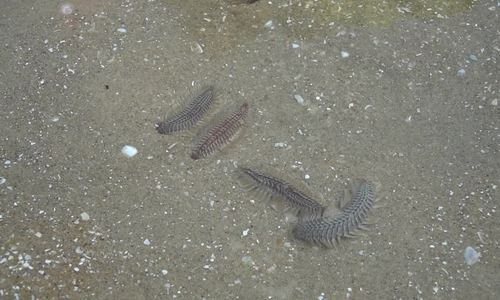