Non Nuoc Cao Bang, founded in 2015, covers 3,000 square kilometers on the border with China. Its collection of fossil, sediment, volcanic rocks and karst landscape is believed to illustrate 500 million years of the earth’s history.

Seven hours northeast of Hanoi, tourism has long been a staple of the park, which has more than 200 cultural and historical monuments.

It connects with popular tourist destinations in Cao Bang including the Ban Gioc Waterfall, the largest in Vietnam and the world’s fourth largest waterfall along a national border, after Iguazu Falls, Victoria Falls and Niagara Falls.

Last April, Microsoft network MSN included Ban Gioc in its list of 15 most charming cascades in the world.

Other appealing stops at the geopark include Nguom Ngao Cave, Thang Hen Lake, and the Phia Oac-Phia Den eco-tourism area.

A video captures the beauty of Ban Gioc Waterfall. 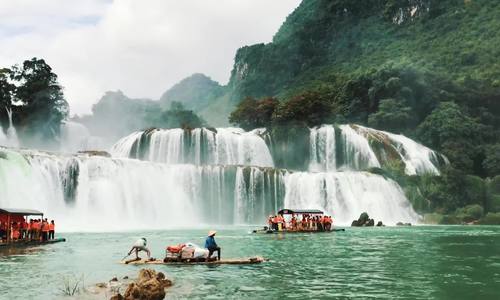