British TV channel Dave, a panel of travel experts and editors of U.K. tabloid Daily Mail polled 2,000 people aged 40 or under earlier this week for a survey of ‘greatest adventures around the world and across the U.K.’

Of them, 24 percent said they want to explore Son Doong Cave in the central province of Quang Binh, dubbed Vietnam’s ‘Kingdom of Caves,’ putting it fifth in the top 20 adventure list.

Climbing Mount Kilimanjaro, the tallest mountain in Africa, topped the list (37 percent), followed by trekking along the Inca trail in Peru (35 percent), rafting in the Grand Canyon in the U.S. (31 percent) and descending into Thrihnukagigur volcano in the U.K. (29 percent).

The rest of the top 10 also included dog sledding to witness the aurora borealis in Norway, kayaking in Arctic fjords in Denmark, climbing to the Everest Base Camp in Nepal, cruising the Antarctic, and cage diving with sharks in South Africa.

Howard Limbert, a former head of the British Caving Association, and his wife Deb spent nearly 13 years surveying caves in Vietnam since the early 1990s. In 2009 they concluded their initial exploration and declared Son Doong the world’s largest cave.

Son Doong opened to tourists in 2013 and the five kilometer-long system, which is 150 meters high and 200 meters wide, contains at least 150 individual caves, a dense subterranean jungle and several underground rivers.

Due to limited space, registration for Son Doong tours must be made well in advance. According to Oxalis, now the only company licensed to take tourists to the cave, only 300 slots are available this year.

A four-day expedition costs $3,000, and there are buses running from Hanoi to Dong Hoi, the capital town of Quang Binh, and then to the park.

The Quang Binh government recently increased the number of tourists allowed to visit the cave in a year from 640 to 900.

The tour is growing in popularity, and with Son Doong getting prominent coverage from the National Geographic, CNN and Good Morning America, Phong Nha-Ke Bang has become the go-to destination in Vietnam for adventurous travelers.

In 2017, the New York Times labeled it among the world’s top eight travel destinations, while the National Geographic has it a “natural wonder” in Asia. 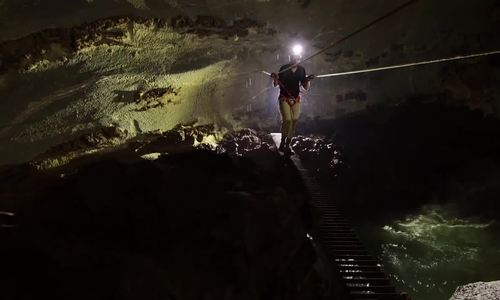